Can there be a more restrictive ‘canvas” for an artist, much less a sculptor than the dial of a timepiece? The mother-of-pearl dial of Arnold & Son Ultrathin Tourbillon Koi and its delicately placed hand-painted carp and sculpted lotuses surrounding a flying tourbillon, would certainly prove a challenge but not one that would stymie the Citizen Group’s Swiss brand: Arnold & Son presents the Ultrathin Tourbillon Koi, a delicate unique piece that blends fine watchmaking and the artistic crafts.

Arnold & Son perpetuates the legacy of 18th century English watchmaker John Arnold, a contemporary of Breguet in the pioneering field of marine chronometers and precision tourbillon escapements. The ultrathin A&S8200 tourbillon movement is among the twenty calibres presented to date by Arnold & Son to have been conceived, developed, and decorated by sister Manufacture, La Joux-Perret. Moving into the creation of bespoke commissions, the creativity of the House is best exemplified in the Ultrathin Tourbillon Koi. Arnold & Son draws on the vast possibilities presented by the calibre A&S8200, briefly the world’s thinnest tourbillon, by tapping on the artistic majesty of age-old techniques like enamelling, miniature painting, cloisonne and champleve. The Ultrathin Tourbillon Koi.showcases a broad spectrum of House skills within a red-gold case measuring 8.34 mm thick, capturing the dynamism and serenity within a few millimetres of “canvas”. 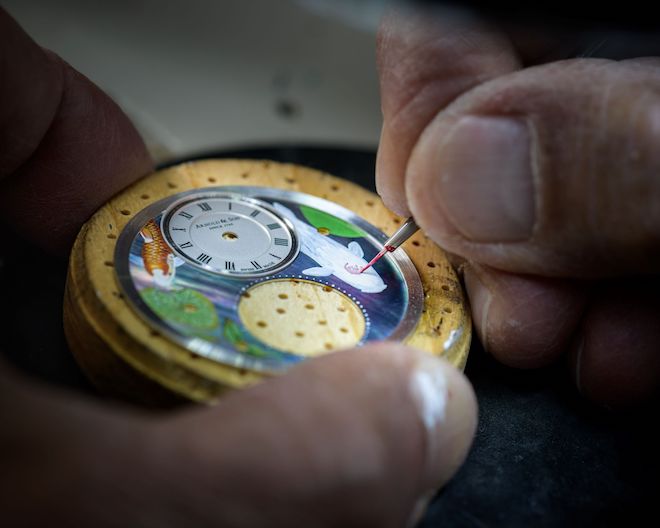 Depicting two carp gliding between lotus blossoms, Arnold & Son deftly combines traditional watchmaking with artisanal crafts to fulfil the wishes of its clients with the bespoke and unique Ultrathin Tourbillon Koi. A Tancho carp, recognisable thanks to the large red mark on its head, swims on the right-hand side of the dial, accompanied by another koi in shades of white and orange gracing the other side of the dial adorned with hand-sculpted and painted lotus flowers.

A symbol of perseverance in the face of adversity, Koi are a popular theme in traditional Japanese art and inspire tranquillity. The three lotus blossoms which accompany the carp have petals cut from silver and shaped, before being engraved, polished and painted in dazzling white lacquer. Each flower’s pistil is formed separately using the same techniques, then the two parts are combined, replicating incredibly life-like sculptural interpretations of the East-Asian floral motif.

The carp and lotus leaves, meanwhile, are painted by hand using incredibly thin brushes that allow a wealth of details to be added, such as scales, barbels and striped fins. The base of the dial is made from blue-toned mother-of-pearl, its iridescent shimmer evoking the water in which this charming scene unfolds.

The 2.97 mm thin calibre A&S8200 still puts the Arnold & Son Ultrathin Tourbillon Koi within reach of the all-time records for thinness in this category surpassed recently by the Octo Finissimo Tourbillion. The movement displays the hours and minutes in an off-centred dial at 12 o’clock. At 6 o’clock, an aperture reveals a tourbillon whose construction is special in more ways than one. 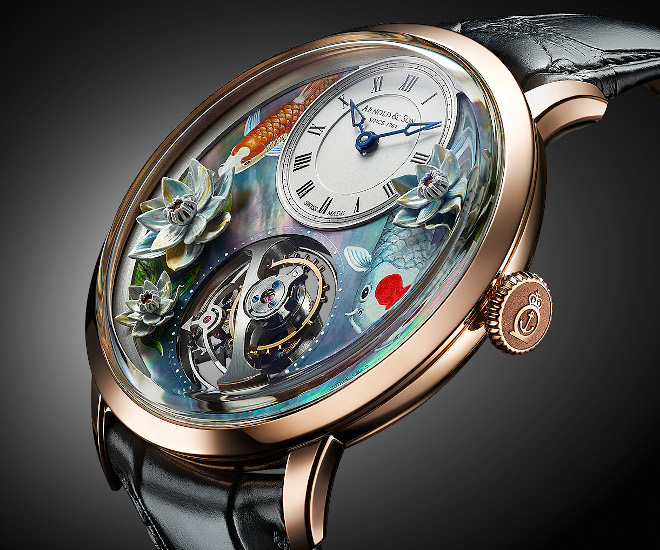 The gravity compensating escapement of the Arnold & Son Ultrathin Tourbillon Koi is of the ‘flying’ variety, meaning that it only has a lower carriage bridge. Since the top is not held in place, a few precious millimetres of height can be saved, thus freeing up the view of this timekeeping mechanism. The balance, meanwhile, is off-centred from the carriage axis, creating a dynamic visual impression as the tourbillon rotates. Another distinctive feature is the balance bridge, which is domed and extends slightly from the dial, ensuring that the rest of the movement is unaffected by the total height.

Arnold & Son is highlighting its tradition of bespoke watch creations, offering them the chance to personalise its collections. Customers can apply substantial changes, making a case, movement or dial unique through engraving, gem-setting, miniature painting or sculpted elements. 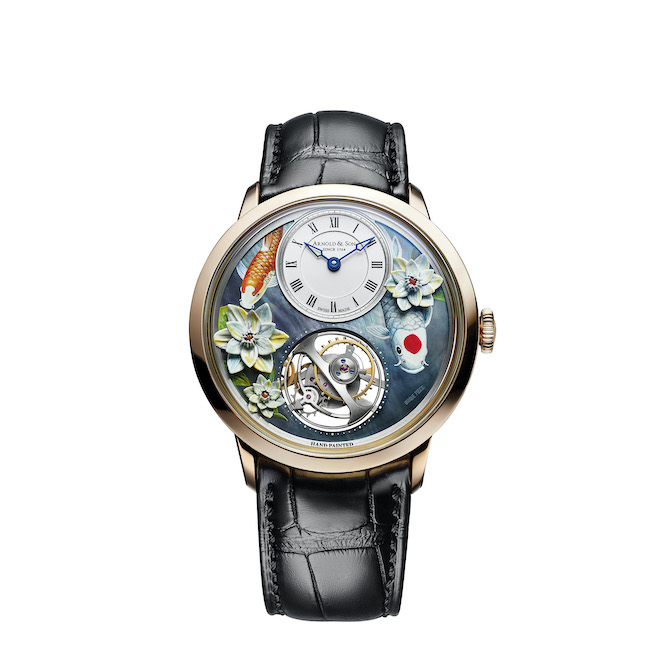 Market Wrap: Bitcoin Pulls Back From $13K While Ether Falls on DeFi Cooling