Showcasing black cabinetry with corrugated glass doors and white countertops, the narrow kitchen facilitates the free passage of natural light through square cut-outs in the walls. Forming a bench in front of the living room’s large windows, the low-lying wood shelving units effortlessly wrap around the space, creating opportunity for residents to store objects along the interiors of the wall. 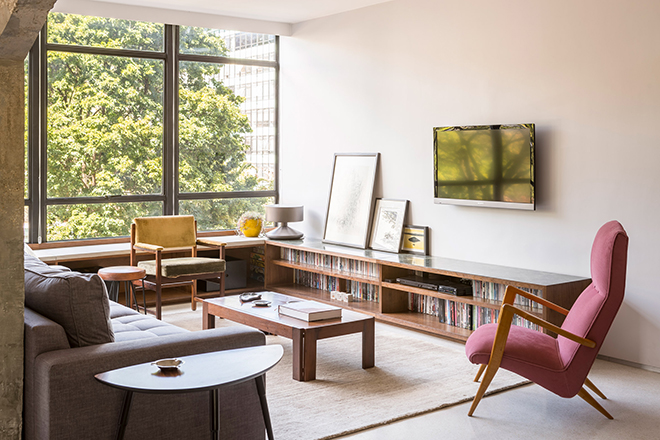 Fully furnished with a grey couch, wood tables, a massive wooden bookshelf stacked with books and audio equipment, decorative wall paneling, and custom-built concealed bedrooms and bathrooms clad in vertically-laid green tiles – a row of black doors creates a closet that doubles as a doorway to enter the bathroom situated between the two bedrooms, whilst a large rectangular mirror hangs above the wood vanity, and is topped by two circular sink basins. 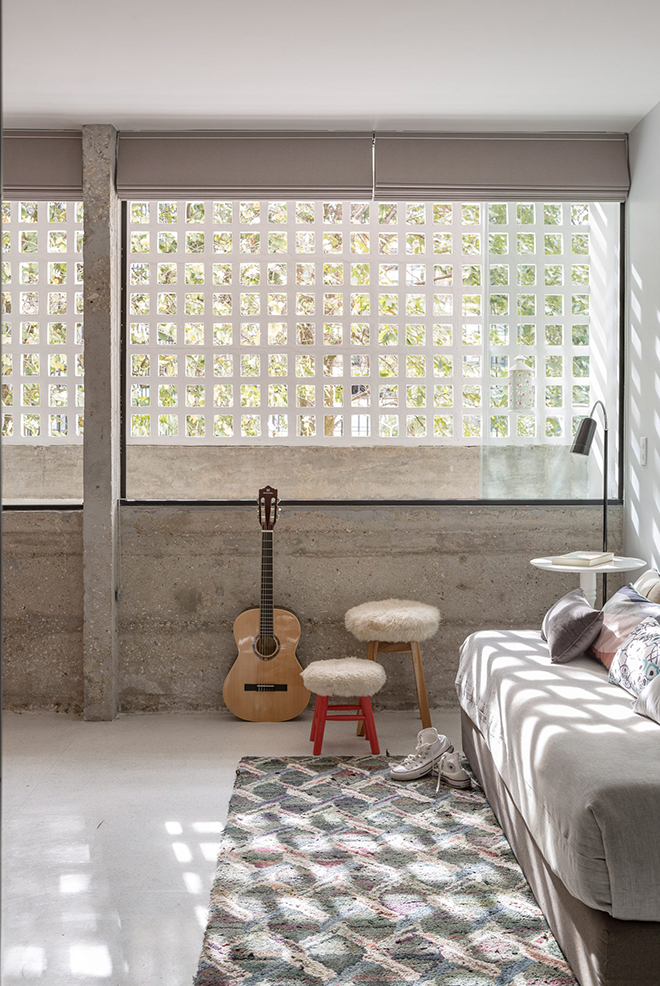 While spectacular and highly imaginative, not everyone is prepared nor has the means for a total home-revamp, as a result, here are individual pieces that one could incorporate to reminisce the tumultuous 60’s. 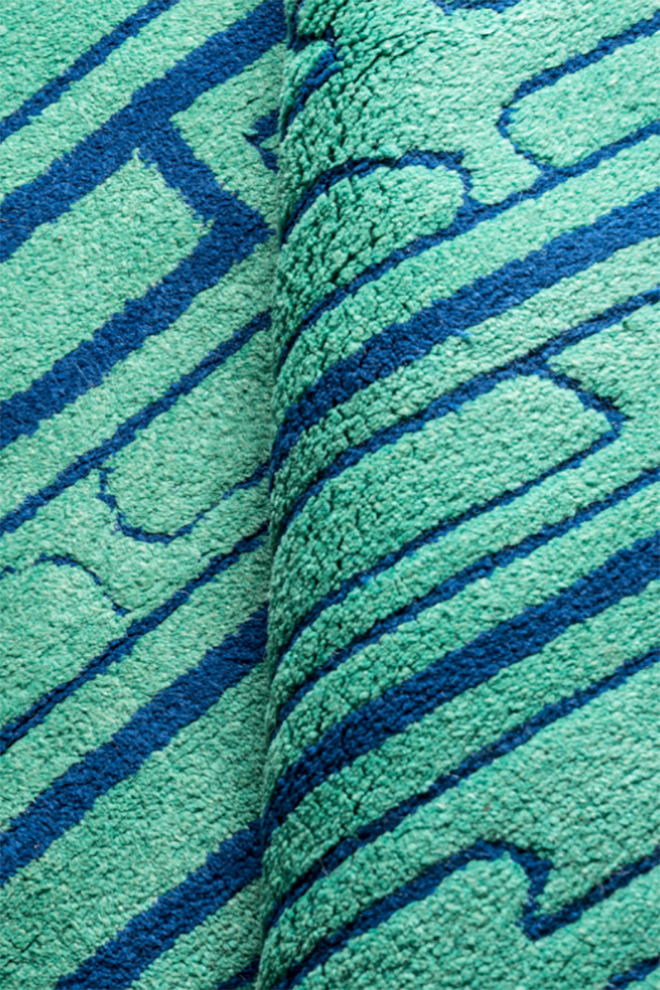 Revered for her high-quality crafts, bags and accessories, whilst inspired by the colors textures and traditional folk art of Ecuador – this hand-knotted wool carpet from the 60’s was designed by the legendary Hungarian artist, Olga Fisch. Signed in weave Fisch, the carpet measures 362 x 278cm (142.3/5 x 1091⁄2 in.), and is currently worth at least USD 6,759.60 to USD 9,012.80. 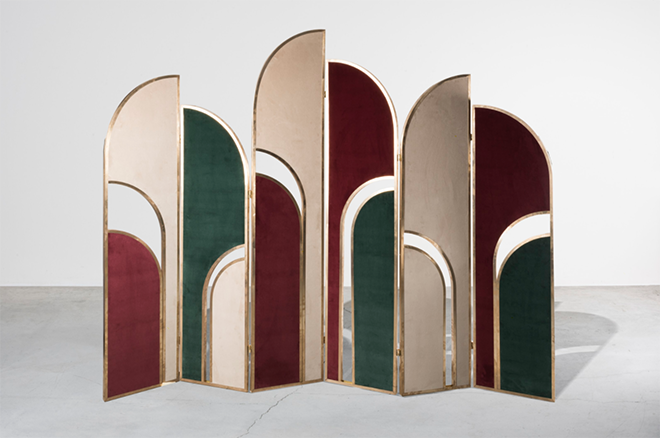 Born in 1987 and based in Milan, Marsica Fossati began her career working with a number of architecture studios, she eventually branched out as a lone interior designer. Priding herself in the inclusion of historic elements and patterned fabrics, the artist is renowned for her seamless ability to mix contemporary design with natural and rough materials. The folding screen, from her ‘Meticulous’ collection in 2018, was constructed from brass and velvet, is currently worth at least USD 9,012.80 – USD 13,519.20, measuring 190 x 249 x 21⁄2 cm. (745⁄8 x 98 x 1 in.). Best known for his designs of mid-century furniture, Italian architect and designer, Paolo Buffa used a combination of low-profile, rectilinear, and hardwood forms to produce his most classic pieces. His work, characterized by a melding of tradition and modernity, earned him both critical and commercial acclaim, with a history of exhibitions at the 1948 Salon des Artistes Decorateur in Paris. Meticulously crafted with mahogany and silk upholstery, Paolo Buffa’s pair of 1995 open armchairs are worth an estimated USD 3416.85 – USD 5694.75, and measure at least 90 x 62 x 60 cm. (351⁄4 x 241⁄4 x 233⁄4 in.). 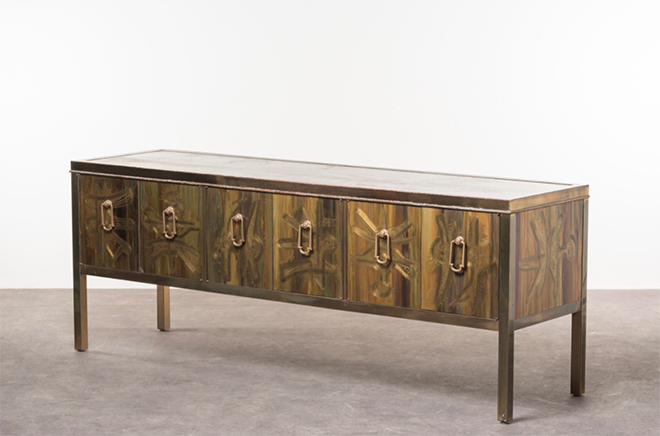 Famously for unexpectedly entering a marriage-like relationship between metal and his imagination, German sculptor and furniture designer, Bernhard Rohne was once described by a reporter as an ‘addict of his own work’ – renowned for merging his knowledge of metals and chemistry with a catalyst of creative ability. Constructed from brass-covered wood and acid‐etched copper panels manufactured by Mastercraft, USA, Rhone’s sideboard from the 1970s measures 75 x 198 x 53 cm. (291⁄2 x 78 x 21 in.), and is currently worth at least USD 3,379.80 – USD 5,633. Following a lineage of skilled craftsman, Bruno Mathsson was the son of a master cabinet maker. Spending more time at work in his father’s gallery than at school, it was there that the Swedish designer found his calling in the field of crafting furniture, specifically chairs. Developing techniques for building bentwood chairs with hemp webbing, Mathsson’s creations had earned him equal standing with the likes of Finnish architect and designer, Alvar Aalto, whilst securing him innumerable exhibitions in New York’s Museum of Modern Art (MOMA), throughout the 1940s. Regarded as the first architect in Sweden to build all-glass structures with heated floors, Bruno Mathsson’s work is highly sought after and well-preserved till this day. His Pernilla’ lounge chair, designed from beech wood and black leather upholstery in 1944, is currently worth at least USD 2,253.20 – USD 3,379.80.

Newer Story ‘We Cannot Depend on Centralized Platforms’

Bitcoin Has Been Less Volatile Than Tesla Stock for Months