Sanlorenzo is expanding its range of crossover yachts with its new SX112, which will join the SX88 (2017) and the SX76 (2018) in its renowned crossover series conceived by Luca Santella, mixing explorer style with classic flybridge motor yacht design.

Bernardo Zuccon designed the exterior of the Sanlorenzo SX112

Like its two smaller sisters, the SX112 has an exterior by Bernardo Zuccon of Zuccon International Project, while the interior is by Piero Lissoni, Sanlorenzo’s art director since 2018.

The shipyard pinpoints the aft zone as the yacht’s most iconic area. Conceived as a spacious internal beach area, it is directly connected to the outside and features retractable terraces to increase the indoor-outdoor connection. The aft area is the yacht’s focal zone, according to Sanlorenzo

In line with the smaller SX models, the main deck has been organised as a clean, open space. Placing the wheelhouse on the flybridge frees up the forward part of the main-deck interior, creating a single continuous space for the living and dining areas.

Staircases remain a fundamental characteristic of Lissoni’s design. The internal helical staircase extends through three levels to connect the decks, and at the height of the main deck, it’s enclosed in a transparent oval volume, making it seem suspended in the air. The external staircases have a clean look, in keeping with racing-yacht design. 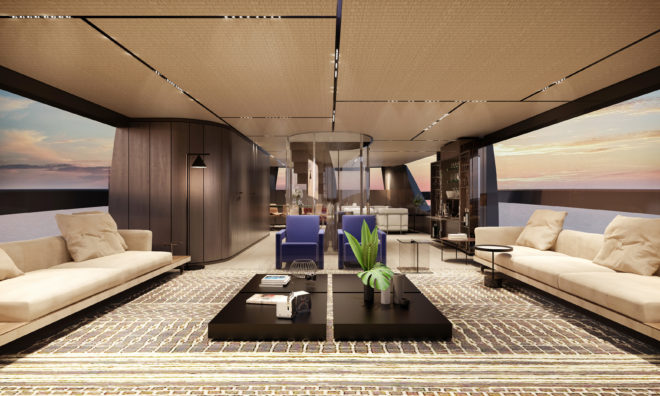 The interior is by Sanlorenzo art director Piero Lissoni

The yacht has 18,000 litres of fuel and quadruple Volvo IPS3 1350S (1000hp) propulsion for a top speed of 23 knots, a cruising speed of 20 and an economical speed of 12. Sanlorenzo is represented in Asia by Simpson Marine.

Will the USD Hold Up as the Global Reserve Currency?