The quadrennial block reward halving for Bitcoin Cash (BCH) has come and gone, with miner rewards dropping from 12.5 BCH to 6.25 BCH. The event marked a pivotal moment for the fifth-ranked cryptocurrency by market capitalization, as it was its first 50% block reward reduction since emerging as a hard fork of Bitcoin (BTC) back in 2017.

The Bitcoin Cash chain experienced another split that led to the creation of Bitcoin Satoshi Vision (BSV) in late 2018. The chain of events leading to the BCH blockchain split caused a cascade of network issues, as the hash war between both factions almost led to a mining death spiral on the Bitcoin blockchain.

BSV’s halving event is coming up in less than a day, and Bitcoin’s halving will come in mid-May. The halving for both BCH and BSV is happening earlier than BTC’s because Bitcoin Cash temporarily used a different algorithm to adjust its mining difficulty back in 2017, thus speeding up the block creation time.

There are several analyses of halvings, as it occupies an important position in the bull cycle for BTC, with Bitcoin’s price setting a new all-time high within a year after the previous 50% reduction in the block reward.

Approximately every four years — more specifically, after 210,000 blocks have been mined — the block reward earned by miners on the BCH, BTC or BSV chains reduces by 50%. Satoshi Nakamoto, the pseudonymous creator of Bitcoin, coded the halving as an inflation-control measure in the blockchain protocol.

Together with the finite supply of 21 million “coins,” the halving constitutes the basic rules of the Bitcoin protocol — and by extension, those of forks like Bitcoin Cash and Bitcoin SV. The periodic inflation drop slows down the supply of new coins, thus preventing the emergence of an inflationary-skewed supply-demand dynamic. Without the halving, miners could, in theory, acquire all of the block rewards, likely causing the price to crash.

Indeed, the halving and hard cap set by Nakamoto was in response to the inflationary nature of fiat currencies. Central bank practices like quantitative easing and indiscriminate printing of currency usually serve to devalue national currencies. The scarcity created by the halving process echoes the dynamics of gold mining. Earth’s own supply of the precious metal is finite, and each extraction from the crust makes it even more difficult to acquire the remainder.

At 12:19 p.m. (UTC) on Wednesday, April 8, 2020, Bitcoin Cash saw the production of its 630,000th block, triggering a halving of its miner reward. Bitmain-owned Antpool was the winning mining pool for the milestone block.

In the hours leading up to the halving, BCH stakeholders like Roger Ver of Bitcoin.com, Bitmain boss Jihan Wu, and major Chinese crypto miner and BTC.TOP CEO Jiang Zhuoer appeared in a livestream session to discuss the future of Bitcoin Cash. When asked about the possibility of the halving being “priced in” and thus not having a significant impact on BCH price action, Zhuoer remarked:

“Why does ‘price in’ theory fail? That’s because the crypto users are expanding as Bitcoin continues developing rapidly. Many users coming to the market in the next two years have not joined the community yet. Thus, the ‘price in’’ theory is not applicable without the majority of future users in the market.”

As previously reported by Cointelegraph, the conclusion of the halving saw the BCH blockchain suffer stagnation with the next block — i.e., 630,001 — as it took almost two hours to emerge. While Bitcoin Cash can handle about 116 transactions per second, this rate fell to just 1.11 TPS.

As of press time, data from blockchain explorer Blockchair shows the BCH transaction rate falling even further — to 0.34 TPS — indicating the continued slowdown of economic activity on the network. The average block time has, however, reduced from 100 minutes to 18 minutes.

In the hours leading up to the halving, BCH did gain about 11%, temporarily topping out at $280. However, the event did little to sustain the upward momentum, with Bitcoin Cash down by 5% in the last 24 hours.

BCH price trend over the past three days. Source: Coin360.com

Commenting on the halving event itself, George Donnelly, the business development manager at Bitcoin ABC, revealed that it was still too early to see the bigger picture that would emerge following the block reward reduction. Donnelly told Cointelegraph:

“The first halving, post the Bitcoin Cash fork, was a great success. But the event is still unfolding. We lost some hash rate for the moment, but it may return soon. The larger trend has yet to reveal itself. Bottom line, BCH blocks are still being produced and the halving may turn out to be essentially a non-event. This is, in reality, little different than the BCH price drop last month, which we now see recovering.”

Before the halving, a lot of commentaries dwelled on the likely response of BCH miners following the block reward reduction. Some pundits had predicted that mining nodes would move their hashing potential away from Bitcoin Cash in favor of BTC and BSV, all three of which share the same mining algorithm.

Back in March, crypto analytics platform Coin Metrics issued a report arguing that the upcoming halvings for both networks would force miners to migrate to the BTC chain. In a private note to Cointelegraph, Alejandro de la Torre, vice-president of crypto mining pool Poolin espoused similar sentiments, predicting:

“I do expect some miners to leave Bitcoin Cash, yes. Since BCH shares the same algorithm as Bitcoin and Bitcoin SV, miners can switch to mine these other chains where the reward has yet to halve.”

Indeed, miners have been known to frequently make this migration largely driven by economic considerations, with computing power being dedicated to the most profitable chain. A significant exodus of miners can negatively impact the security of the blockchain and thus make it susceptible to a 51% attack.

Such a hostile event may take place after a significant amount of this hashing power leaves the blockchain, making it possible for rogue actors to gain control of more than 50% of the mining power, which would allow them to double-spend tokens, roll back the ledger and even prevent the confirmation of new transactions. 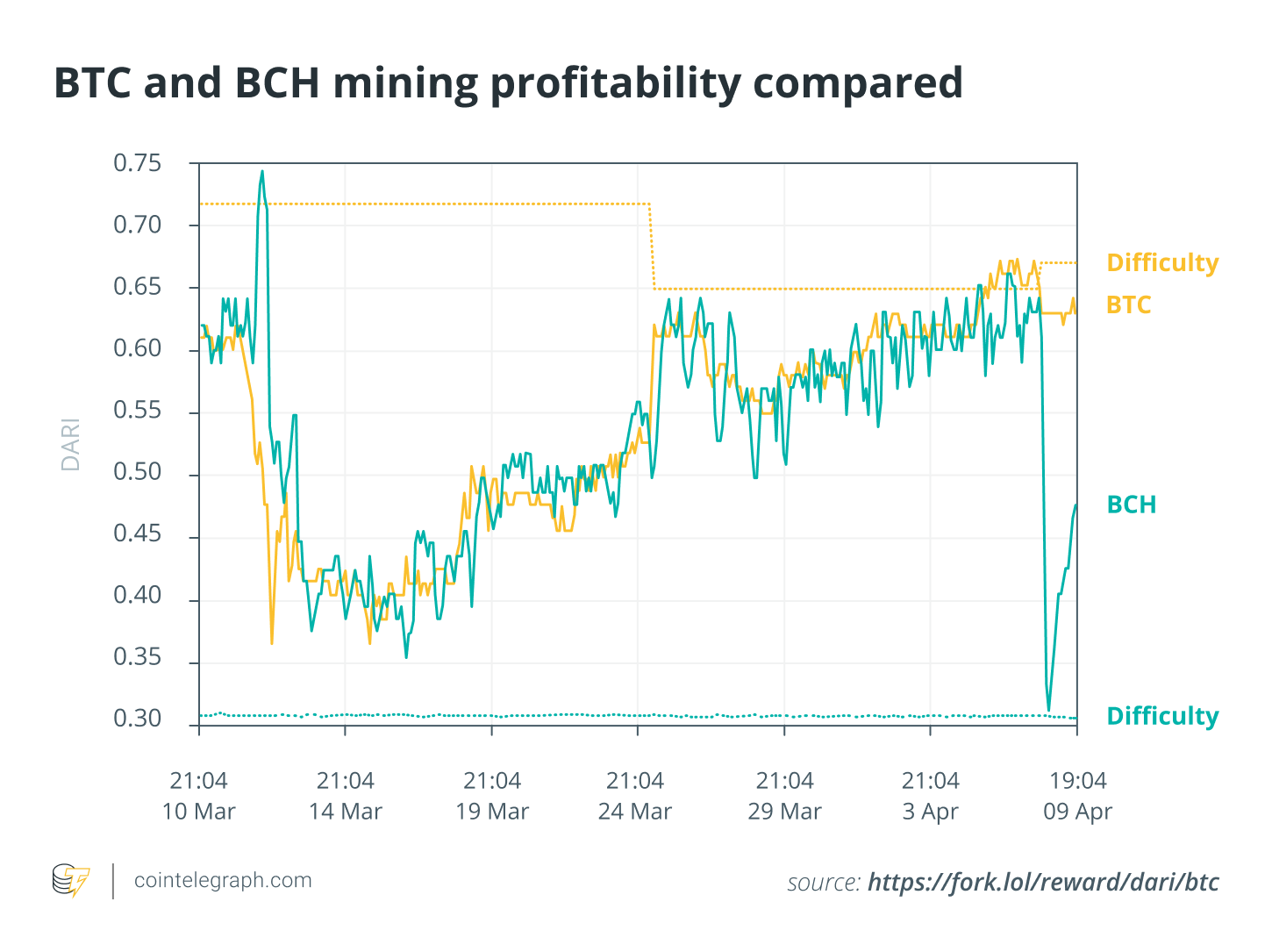 According to data from Fork.lol, the mining profitability for BCH dropped to 50% that of BTC immediately following the halving. While the profitability plunged, mining difficulty remained virtually unchanged, as nodes seemingly acted as expected by moving resources to BSV and BTC. Joe Nemelka, a data analyst at blockchain analytics platform CryptoQuant, confirmed the miner exodus from the BCH chain:

“Yeah, it looks like miners have left BCH for other chains. Miners are profit seeking, and so even if miners are committed to BCH, it makes more sense in this case to mine BTC and then trade it for BCH.”

As of press time, the BCH block difficulty has taken a 16% downward plunge to account for the hash rate drop. In a conversation with Cointelegraph, Chun Wang, co-founder and managing partner at crypto mining pool F2Pool, remarked:

“Most BCH and BSV miners mine these coins when the BCH/BSV mining revenue is greater than BTC. Before the BCH halving on April 8, the mining revenue for these three coins was around $0.12 per TH per day. Immediately after the halving, BCH revenue dropped to $0.06, and now it’s at $0.08. Unlike BTC, the difficulty of BCH adjusts after every block, based on a moving window of the last 144 blocks, to ensure a new BCH block to be generated every 10 minutes on average.”

Crypto socialism as a temporary palliative

According to Wang, the only exception to the trend would be miners willing to continue on the BCH chain despite the unfavorable opportunity cost. Indeed, Bitmain-owned Antpool and BTC.com mining pools have been responsible for a large percentage of the mining activity on BCH since the halving.

Jihan Wu’s Bitcoin Cash gamble back in 2018 reportedly contributed to Bitmain’s revenue woes, leading to a series of administrative upheavals at the Bitcoin mining giant. Wu has since returned to the company, albeit under controversial circumstances, with fellow co-founder Micree Zhan now ousted.

With Bitmain’s mining pools still responsible for most of the block mining since the halving, it appears that Wu is doubling down on BCH. This seemingly irrational mining strategy — which some pundits are calling a form of crypto socialism — might be necessary to prevent far-reaching network instability. For Wang, the upcoming BSV and BTC halvings will determine how miners will allocate their hashing potential among all three chains. According to the F2Pool co-founder, “We would expect that most hash rate will continue to leave the BCH chain until the daily mining revenue per TH reaches a similar value as BTC.”

Should the price of Bitcoin Cash experience a sharp decline in the coming days and weeks, reducing the BCH to BTC ratio, the unfavorable opportunity cost for BCH miners will become even more negative. Nodes that elected to not jump ship might be forced to abandon such irrational mining, especially when operational costs begin to increase exponentially. 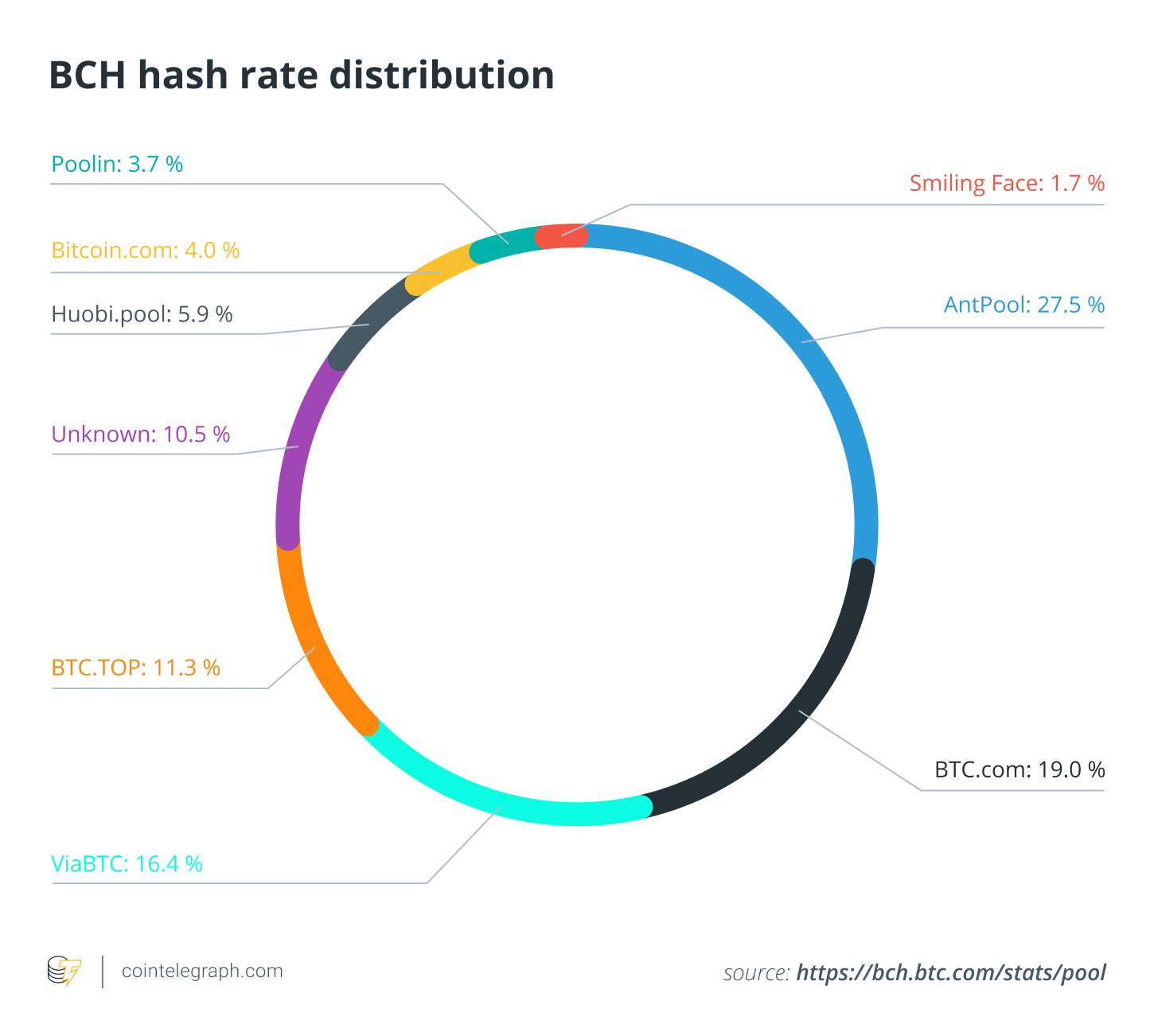 What next for BCH?

For its proponents like Roger Ver, BCH is the embodiment of the ethos laid down by Nakamoto in the Bitcoin white paper because it functions as “peer-to-peer electronic cash,” and Wednesday’s halving marks a landmark moment for BCH: its first halving since the 2017 fork.

A slow down in on-chain economic activity where transaction count stays below 1 TPS for at least some time does not help to bolster the appeal of BCH as a currency for retail adoption in microtransactions. However, the block reward halving is about to make BCH a little scarcer, especially given the fact that 6 million coins — about 32% of the circulating supply — have never moved. For Donnelly, the halving is bullish for BCH, as he told Cointelegraph:

“The reduction in the block reward means there will be less new BCH emitted from now on. This is bullish, as the same demand chases a smaller ongoing liquid supply. It strikes a stark contrast with the unlimited quantitative easing we’re seeing from developed world central banks. We are focused on continuing to grow Bitcoin Cash use and utility.”

While BCH proponents might remain upbeat, the halving appears to have left the network worse for wear. According to Crypto51.app, a platform that tracks the theoretical cost of a one-hour 51% attack on proof-of-work blockchains such as BCH, a rogue actor would only need $5,628 (as of press time) to attack Bitcoin Cash. Earlier on Thursday, April 9, the theoretical cost stood at $7,500. Back on March 10, it was over $21,600.

Commenting on the current security status of the Bitcoin Cash network, crypto podcast host and BCH proponent Collin Enstad told Cointelegraph: “The BCH community itself acknowledges this reduction in security. Miners are profit driven, so of course some of this hashpower will go into BTC or BSV until their halvening happens.” However, Enstad is not worried about a 51% attack, as miner migration is a common theme across the three blockchains, adding:

“During the BSV split, also known as the ‘hashwar,’ many miners moved their hash over to the BCH chain in order to ‘out-hash’ the BSV chain. They did this at a loss, to ensure the integrity of the chain. Because of this, I have no doubt that many miners would do the same if a 51% attack was detected on the network.”

More Than 10,000 New Blockchain Companies Established in China in 2020

Link’s Trading Volume on Coinbase Surpasses That of Bitcoin