In an early-morning tweet on Oct. 29th, Tether announced that it would be performing a 300 million USDT chain swap. The conversion from the Omni protocol to ERC20 tokens will be conducted with a third-party that remains anonymous. 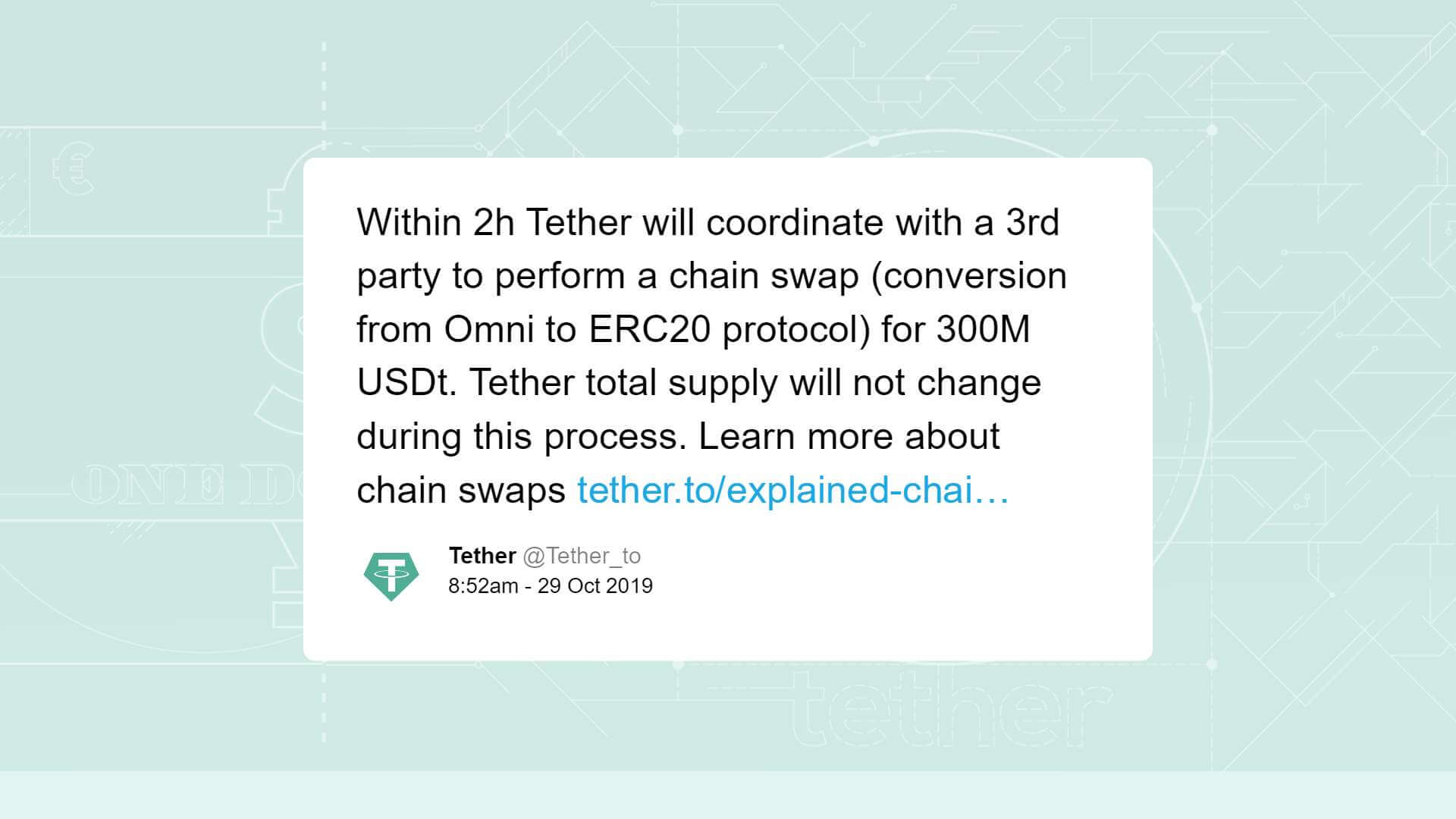 A chain swap is a process in which a certain entity moves a given cryptocurrency from one blockchain into another. It enables the utilization of digital assets across the various blockchains that support them.

At the moment, Tether is available on four different blockchains, including Omni, Ethereum, Tron, EOS, and Liquid. The ongoing swap is meant to move 300 million USDT from Bitcoin Omni-based addresses to Ethereum-based ones.

This is not the first time Tether conducts a major chain swap. Earlier this year, it was reported that the firm was abandoning the Bitcoin-based Omni protocol in favor of the more efficient Ethereum.

Anthony Sassano, an Ethereum developer and head of marketing at Set Protocol, pointed out in July that it was very likely that the majority of USDT in circulation will live on Ethereum instead of Omni. During that time, the number of USDT as ERC-20 on Ethereum was almost 40 percent of the total amount of USDT on Omni. Today, that number is nearly 45 percent, according to Tether’s ‘transparency’ page.

Binance, Huobi, and Poloniex also announced support for ERC-20 based USDT earlier this year claiming that this protocol was faster and more efficient than the Omni network.

Get our daily newsletter containing the top blockchain stories and crypto analysis straight to your inbox.

After Ali began forex trading in 2012 In 2014, he came across Bitcoin’s whitepaper and was so fascinated by the idea of a decentralized, borderless, and censorship-resistant currency that he started buying Bitcoin. By 2015, he started traveling to spread the word about Bitcoin.

Commitment to Transparency: The author of this article is invested and/or has an interest in one or more assets discussed in this post. CryptoSlate does not endorse any project or asset that may be mentioned or linked to in this article. Please take that into consideration when evaluating the content within this article.

Disclaimer: Our writers’ opinions are solely their own and do not reflect the opinion of CryptoSlate. None of the information you read on CryptoSlate should be taken as investment advice, nor does CryptoSlate endorse any project that may be mentioned or linked to in this article. Buying and trading cryptocurrencies should be considered a high-risk activity. Please do your own due diligence before taking any action related to content within this article. Finally, CryptoSlate takes no responsibility should you lose money trading cryptocurrencies.

Newer Story Uber Wants to Be Like Facebook as It Pushes Into Finance; Bad News for Drivers

Older story The Spurs Are Thriving Without Kawhi Leonard

Bitcoin Will Get Stronger After Crisis, Says US Congressman Emmer